The Calgary Stampede is know as “The Greatest Outdoor Show on Earth” and is an annual show held in Calgary, Alberta, Canada every July. The show events are rodeo, chuck wagon racing, barrel racing, funfair rides, food trucks and the list is endless. The show kicks off with a Stampede Parade consisting of many floats, bands and horses etc around the city. This year the parade was opened by William Shatner originally known as Captain Kirk in Star Trek.

The dress code for the period in the city and stampede is western wear, plaid(check), denim, cowboy boots and a cowboy hat. Everyone gets into the spirt around the city even holding stampede breakfasts. You basically can eat for the 10 days for free.

I was lucky to attend the stampede on a corporate event with my husband. We had access into the park, a meal & drinks in a corporate tent and front row tickets to the rodeo. It was a gorgeous day so we were able to walk around and see the market stalls in the BMO Centre, the cattle in the Agrium Arena and the funfair rides on the Midway.

I have attached some photos for you to see. 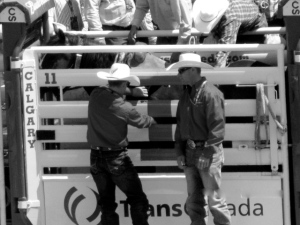 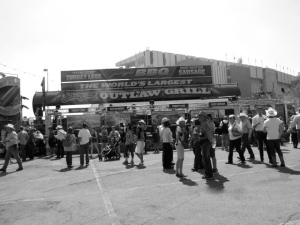 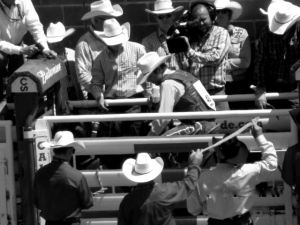 We are looking forward to the stampede in 2015 as we missed so much.