Another UK school dinner favorite, although I’m not a huge fan. I’m sure chocolate lovers will love this recipe, as no baking is required, especially if you purchase a ready made pastry case. I assume the name chocolate toothpaste comes from the consistently of the filling representing toothpaste.

Cream together 70g margarine and 150g sugar until smooth. (I used caster sugar as the granules are smaller)

Add 20g hot chocolate powder and 20g cocoa powder to the margarine/sugar mixture and cream together.

Mix 230g dried milk powder and 150ml warm water together in a separate bowl until smooth.

Blend both mixes together until smooth and thick .

Pour into a ready pastry case and put in the refrigerator until set.

I apologise for the messy edges to the pastry case, I wasn’t having the best of days.  Enjoy 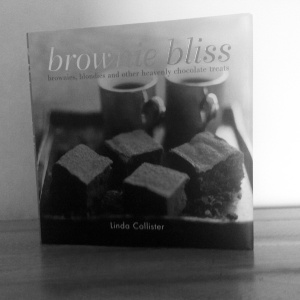 I have never cooked or even liked chocolate brownies in the past but this weeks challenge is in honour of my uncle. My uncle was an incredible man in the kitchen and he was always an inspiration in regards to food. My mum is another excellent home cook however I didn’t achieve the generic talent, yet I took home economics (cookery) as a subject at school. Let’s be clear about this, I’m not a disaster nevertheless I’m so much better being creative in other ways.

I could talk for hours with my uncle about food & cooking techniques and it wasn’t that long ago we were pondering over his cookery book collection. Just last year he sent a couple of cookery books, one being brownies one of his favourite cakes. When starting this weekly challenge I did wonder if I could be converted to love this cake too. I have to be honest it doesn’t float my boat at all, I’ve never been a huge fan of chocolate. I would rather a lemon flavour cake any day, so maybe I should attempt a lemon brownie next time.

Here is the recipe for you brownie lovers from a British cookbook (inside the book my uncle has made some changes to the recipe).

Changes to the recipe by uncle T.

Break up the chocolate and put it in a heatproof bowl. Set the bowl over a pan of steaming water and gently melt the chocolate stirring frequently. Do not let the base of the bowl touch the water remove the bowl from the pan and leave to cool until needed.

Put the side butter and sugar in a mixing bowl and use either a wooden spoon or a hand-held electric mixer to beat until fluffy. Gradually beat in the egged then add the vanilla extract. Next beat in the melted chocolate. When thoroughly combined sift the flour and cocoa directly onto the mixture and stir in. Transfer the mixture to the prepared tin, spread evenly and level the surface.

Bake in the preheated oven for about 20 minutes until almost firm to the touch. Remove the tin from the oven.

Leave to cool in the tin before removing, cutting into 20 pieces and sprinkling with chocolate shavings. Serve with whipped cream.

Well I attempted the recipe yesterday and I soon realized that I was quiet skillful in the kitchen when weighing, measuring and mixing ingredients. Now here comes the disaster, the brownie tasted lovely, however out of the baking pan it did resemble a mole hill on a plate. I can just see my uncle laughing at me, my defence is “it was a British recipe that should have been cooked in a British cooker(stove)”. I won’t give up uncle T, I will attempt them again someday. Oh my, I will have to work on my baking skills. Home Baking 1 – Kat 0